About the Dean of Culture 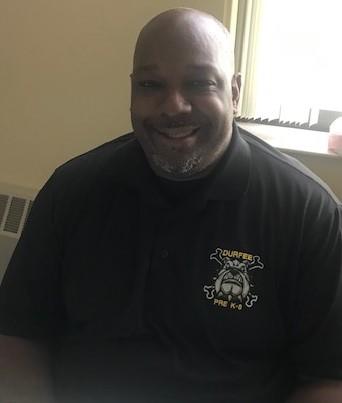 Mr. Arnette B. Jordan, affectionately known as “Coach” by his students,  is currently serving as Dean of Culture at Durfee Elementary-Middle School in the Detroit Community School District. This is Mr. Jordan first year as Dean at Durfee.  He is currently working on his Masters of Arts degree in Educational Leadership at Wayne State University. He earned his Bachelor’s degree from Jackson State University in Jackson, MS and began his teaching career as a Physical Education teacher in the Detroit Public schools in 2001. Mr. Jordan has also served as Residency Compliance Officer and Homeless Liaison in Grosse Pointe Public Schools.  While being a teacher Mr. Jordan was also a basketball coach. He also coached at the collegiate level for several years before returning to public education.

Although he loved being a classroom teacher, he is truly enjoying the impact he is making with students. He has built meaningful relationships with all stakeholders in such a short period of time.  Mr. Jordan is utilizing his leadership skills to build capacity in maintaining a supportive, productive, and enriching school culture.  While reinforcing high expectations for positive student behavior, he has built trust and rapport among the student body.  Mr. Jordan is always willing to help and makes himself available for students, staff, and parents.