Giving Something New a Tri

Sometimes all it takes is a little competition to lead to big changes in life.

In January 2017, WSA’s current Dean of Culture, Ashley Monteleone, challenged a group of three other teachers to train and participate in the Epic Races Tri Goddess Triathlon.

Math teacher Annie Moore decided to give it a try. Along with the others, she spent six months successfully training for and completing the race that included a half-mile swim, an 11-mile bike ride and 5-kilometer run.

“There were many early morning runs and some late at night,” said Moore. “It was difficult at times, but also a lot of fun.”

Since that time, Moore has completed at least one race per month, including two half marathons and a full marathon. The highlight race for Moore was a 198-mile, 12-person group run called the Ragnar Relay.

“It was so much fun running with a group of close friends and competing as a group,” said Moore.

The group of women won first place in the master’s division, which consists of a team of people over 40 years old.

Along the way, Moore has changed her lifestyle and incorporated a healthier diet and workouts at the gym. Her advice to anyone thinking about taking up the sport of running would be to find a running group nearby and meet them for a run.

“You could end up finding a sport you love,” said Moore. 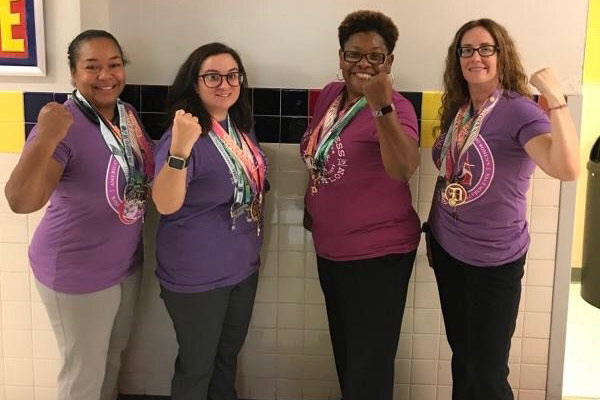